Central Coast teenager Cohen Daly has inspired the Clarence Valley community, including his grandparents who live in Copmanhurst, with his courage and determination as he fought Osteosarcoma, an aggressive bone cancer. Cohen’s family are currently raising funds to allow him to fulfil his dream of travelling overseas while his condition remains stable. Image: contributed
From the Newsroom

Cohen Daly has a dream.

It’s a dream that he is determined to see come true.

And nothing, not even a battle against aggressive bone cancer, will prevent the strong-willed teenager with the beautiful smile from fulfilling his ambition.

Following his shock diagnosis with Osteosarcoma on New Year’s Eve in 2020, Cohen underwent several months of chemotherapy and three surgeries before participating in a new trial in conjunction with intravenous and oral medication towards the end of 2021.

While a positron emission tomography (PET) scan initially showed Cohen currently has no active cancer cells, his family recently shared the devastating news that his body has started rejecting Lenvatinib, a daily anti-cancer medication he was prescribed last year as an ongoing treatment.

As Cohen bravely continues to fight new challenges, his oncologist from Westmead Children’s Hospital advised his loving parents Michael and Ellicia Daly to help make Cohen’s dream come true and take their son to Japan while his condition is stable.

Determined to do everything they can to take Cohen to the land of the rising sun this year, Mrs Daly has returned to work fulltime while Mr Daly is currently working two jobs.

A Gofundme page has also been set up to help the family raise funds to take Cohen overseas.

They hope to travel to Japan in March or April during the country’s annual cherry blossom season, which Cohen has always wanted to see.

While Cohen lives on the Central Coast, his courageous spirit is widely recognised, admired and loved by the Clarence Valley community who have been following the 13-year-olds journey and supporting him and his family through various local fundraisers.

Speaking with the Clarence Valley Independent last week, Cohen’s grandparents Dave and Trish Seymore of Copmanhurst continue to express their heartfelt gratitude to everyone who has made a contribution towards their beloved grandson’s plight during the past year.

“Cohen has always wanted to go to Japan since he did a school project on the country in Year 4,” Ms Seymore explained.

“He’s always been fascinated by Japan, and he’s always said, ‘one day, I’m going to go to Japan’, and he’s never given up on that dream.

“We want that dream to come true for him.

“That would be wonderful.” 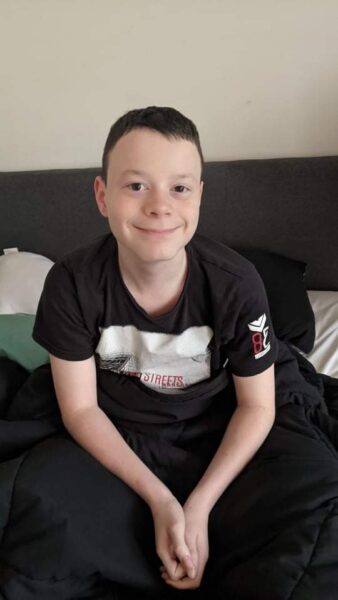 The timing of the planned trip would also coincide with Cohen’s birthday on April 4.

Ms Seymore said Cohen’s interest in Anime, a type of computer animation which originated in Japan, also ignited his interest in the country.

If you would like to make a donation to help Cohen achieve his dream of travelling to Japan, please visit