David and Lily Medhurst on their wedding day and together at their home at Palm Lakes in Yamba. Image: Lynne Mowbray
From the Newsroom Local News

David and Lily Medhurst of Yamba are celebrating their 60th wedding anniversary this week.

David said that he was born in London and Lily was born in Sunderland (north of England). Lily’s family eventually moved to London and the couple met on an excursion with a youth club to Southend, to see the Christmas lights. 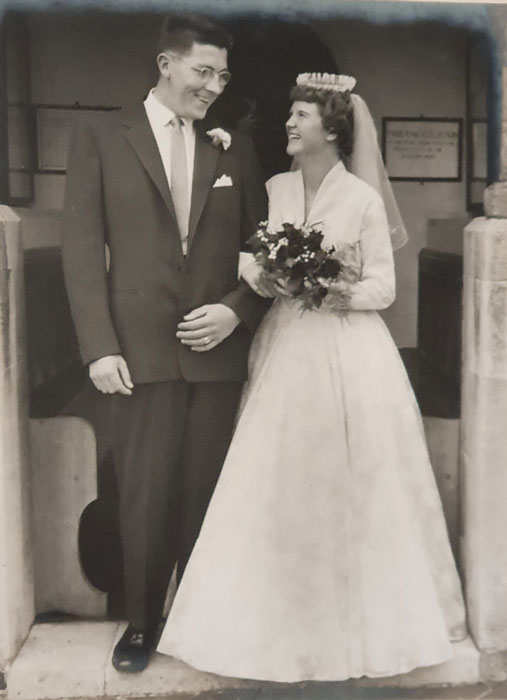 “It was going to be a working holiday/honeymoon and we stayed.

“As soon as we got off the boat, I went to Bronte RSL and the first people I met were ‘The Deltones’, and when I started working at Bronte Beach, I got to know them.

“We started off at living Bondi Beach where I worked for the local council as a beach inspector at Bondi Beach, Bronte Beach and Tamarama and Lily got a job working for a soft furnishing company, making curtains.

“In 1965 our first daughter was born; the first of three girls.

“In 1972 we built our first house at North Rocks (near Paramatta), before building a bigger home at Kellyville where we started our own interior decorating business Hawkesbury Interiors – (David was a painter and Lily made curtains).

“Some of our top clients over the years included Mel Gibson and his family, Doug Walters, Ian Moss, Cold Chisel and Jim Airey (world speedway champion).

“From Sydney we moved on to acreage at Waterview Heights in 1998. Our youngest daughter did trackwork and she put her horses on there,” he said.

The couple have been living at Palm Lakes in Yamba, for the last 15 years.

David said that they are celebrating their 60th wedding anniversary on 17 September 2020 and because of COVID-19 their family are unable to celebrate the event with them.

“Our friends who live two doors up are taking us out for lunch at the Yamba Tavern,” David said.

“We had planned to be on a five-week cruise around the Pacific and to Hawaii with our three daughters to celebrate our anniversary, but because of COVID the cruise was cancelled. So, it’s now on the to-do list.

The couple said that they attributed their long and happy marriage to communication.

“We talk a lot and get on well together – we’re a good team,” said Lily.

“We talk about everything and we’re always open with each other and we made decisions together,” she said.

“Yes, we discuss everything together – until I can agree,” David said laughing.