The M/Y Steve Irwin and its crew are travelling north to Abbot Point, Queensland, where it will join the campaign to stop the Adani coalmine. Image: Geoff Helisma.
Latest News

Sea Shepherd is known the world over for its campaigns to protect the ocean’s wildlife and ecosystem – last Wednesday night July 23, the M/Y Steve Irwin paused offshore from Yamba on its journey north to the Abbot Point coal port, 25 kilometres north of Bowen.

The Independent accepted Captain Mal Holland’s invitation to spend some time aboard his ship.

Climbing aboard as the sun set, it was evident that the friendly and welcoming crew operated as a team, with a strong focus on process and safety.

There’s also an official ethos underpinning the group’s protestations, Sea Shepherd’s mandate is, “to assume a law enforcement role as provided by the United Nations World Charter for Nature”, which states, in part: “all persons, in accordance with their national legislation, shall have the opportunity to participate, individually or with others, in the formulation of decisions of direct concern to their environment, and shall have access to means of redress when their environment has suffered damage or degradation.”“We are bringing a sea-going element, [Operation Reef Defence], to the ‘Stop Adani’ campaign,” Capt Holland said.
“We also bring a symbol of the power of civil action to enforce the sanctity of diverse life, by bringing the Steve Irwin up to Abbot Point, which right now is a major focal point, a point of concentration on what is the worst example of humanity’s techno-industrial expansion across the world.”
Capt Holland said Sea Shepherd had set a precedent for this type of action in 2012.
“We took the Steve Irwin up to Broome and James Price Point … where the Western Australian Government was pressuring the gas company, Woodside, into creating a mega port and a gas refinery,” he said.
“That would have opened up what is one the last remaining wild savannahs of its kind in the world.
“We shut it down.
“There was an existing campaign there, they had a citizen science initiative where they did a really good fauna survey – it was happening right in a humpback calving ground.
“It was the wrong spot for so many reasons.

“That moment, when we brought the Steve up, kind of turned the tables on it.
“Woodside pulled out of it and have since decided to invest their resources elsewhere.”
Onboard the Steve Irwin last week, it was evident that the volunteer crew’s ages ranged from early 20s to mid 60s and that there is deep collective connection with the environment – at least, among the crew that the Independent interviewed.
The crew’s various demographics are, to some degree, representative of those found in wider society, which Capt Holland feels is not always recognised politically.
“I don’t believe that conservative forces understand how popular it is to champion the cause against fossil fuels for power generation,” he said.
“If you survey the population; it’s not just a group of thoughtful people who sense that things aren’t right; it’s most of us.
“Sea Shepherd appeals to everyone, all the age groups are covered.
“It doesn’t matter if you are a leftist or an ultra conservative, if you engage with the ocean in anyway, if you’re a diver or a surfer or just like walking on the beach.
“We have a really broad appeal – we’ve demonstrated it over the years with Sea Shepherd.
“When we take the vessel up there [to Abbot Point], we can change the narrative: this campaign against the mega-mine isn’t just some kind of feral radicals or something like that – it’s popular, this is relatable to everyone.
“It’s Steve Irwin, who’s going to say a word against that?”
Part of Sea Shepherd Australia’s mission is to use “innovative direct-action tactics to investigate, document and take action when necessary to expose and confront illegal activities on the high seas.
“By safeguarding the biodiversity of our delicately balanced oceanic ecosystems, Sea Shepherd Australia works to ensure their survival for future generations.”

For more information, visit Sea Shepherd’s website. www.seashepherd.org.au
Look out for the September edition of Scene Magazine, for a feature about being a Sea Shepherd volunteer. 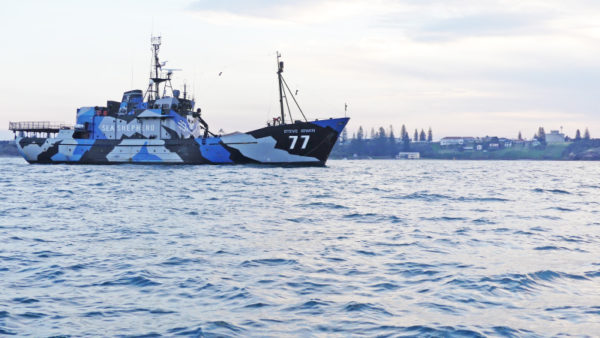